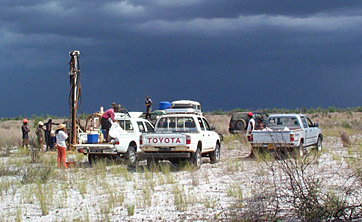 The Ranobe deposit is located approximately 40km north of the port of Toliara in south western Madagascar. The mineralised zone at Ranobe is around 16km long, 1 to 2 km wide and comprises three mineralised sand units; the upper sand, intermediate sand and lower sand units.

A heavy minerals (HM) Mineral Resource has been calculated, in accordance with the JORC Code, for the Upper Sand unit.

The average heavy mineral assemblage composition in the Ranobe Resource is 72.2% ilmenite, 5.6% zircon and 2.3% rutile.

The ‘Starter Pit’ mining licence (Permis D’Exploitation 37242) contains an estimated 176Mt Mineral Resource at an average grade of 8.13% THM, most of which is in the Measured category.

The remainder of the 884 Mt Mineral Resource at Ranobe is within an exploration licence (Permis De Recherche 3315). Both mining licences were granted in April 2012 and have a term of 40 years and may be renewed for one or more additional 20 year terms.

The estimated Mineral Resource of 884 Mt at an average grade of 6.2% THM within the Ranobe licences has the potential to support a mine life of more than 60 years at the expected mining rate of 12 Mt per annum.

The global potential of the resource in the Ranobe area may be significantly more than this, as wide spaced drilling indicates that mineralisation in the Upper Sand Unit extends to the north (possibly by 1km), west (beyond intersections in the most westerly holes) and south (by possibly 5km), as well as within the Intermediate Clay Sand Unit and the Lower Sand Unit. 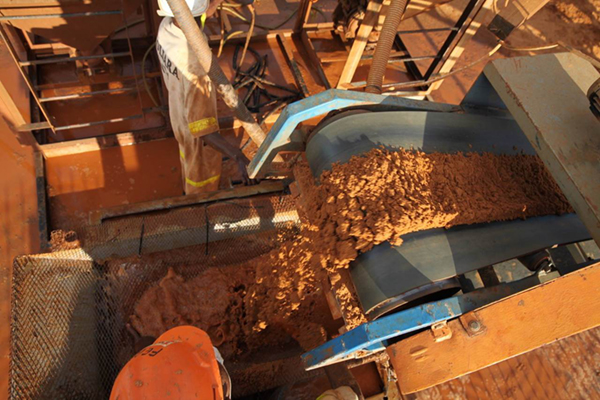 Ore Reserves have been estimated using all available geological, drill hole and assay data, including mineralogical sampling and test work on mineral recoveries and final product qualities. The Ore Reserve estimates are determined by consideration of all the modifying factors in accordance with the JORC Code 2004, and may include but are not limited to, product prices, mining costs, mining dilution and recovery, metallurgical recoveries, environmental considerations, access and approval. 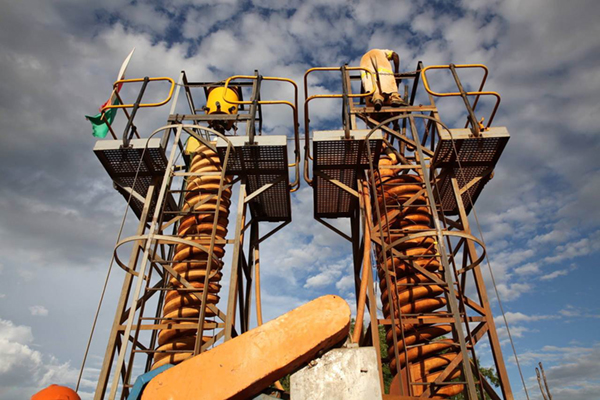 Front end loader (FEL) mining has been selected for this operation as it provides a high degree of flexibility, reduces the risks imposed by mining in close proximity to the limestone basement along the eastern side of the deposit, and is able to selectively sequence and mine the higher grade parts of the deposit to maximise the project cash flow.

The ore zone ranges between 2–30 metres in depth and will be mined by FELs. Ore mined by the FELs will be fed to mining units and pumped to the wet concentrator plant. Mining operations will be performed by a contract miner.

Based upon the Measured and Indicated Resource in the ‘Starter Pit’ Licence area a mining schedule has been developed. Mining will commencein the southern portion of the orebody corresponding to an area of high HM grade. 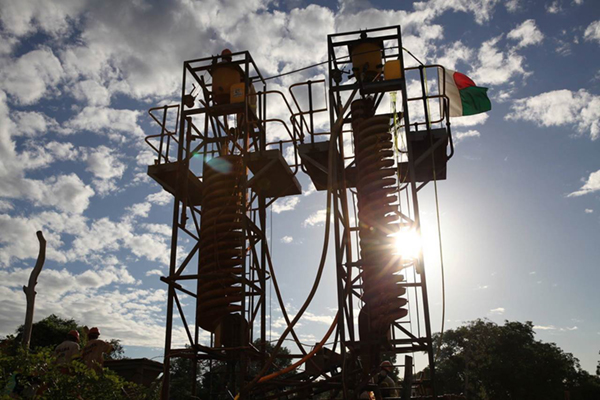 The Ranobe Mine is projected to produce 600,000tpa of ilmenite and 65,000tpa of zircon rich concentrate per annum over an initial 20 year mine life. This first phase of development utilises around 27% of the 884 million tonne of Mineral Resource defined at Ranobe.

The overall THM grade of 6.2% at Ranobe is high by minerals sands industry standards and the initial Ranobe mine plan focuses on a Ore Reserve averaging 8.2% THM, resulting in one of the highest in-situ ore values in the sector. With no overburden and very low slimes (<5%) simple dry mining can be utilised.

The heavy mineral at Ranobe consists predominantly of ilmenite making up approximately 70% of the concentrate produced. The project also benefits significantly from the presence of much higher value zircon and rutile which together contribute about 10% of the heavy mineral, but around 30% of the value of the ore mined. 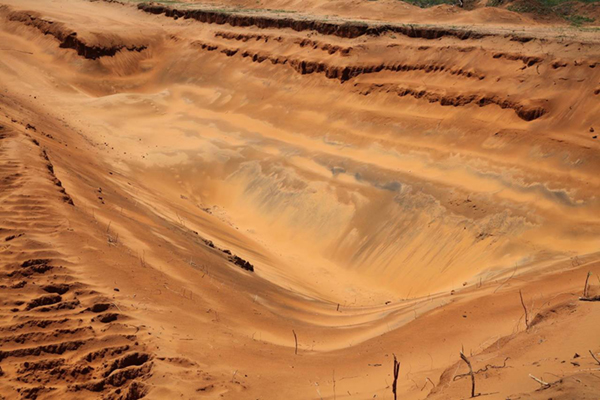 The ilmenite and zircon rich concentrate can be easily separated utilising standard equipment and existing infrastructure can be leveraged to minimise the initial development capital.

A Definitive Engineering Study (DES) completed in August 2012 confirmed that a low capex, low technical risk and simple mineral sands operation can be built using proven technology. The original concept envisaged utilising a simple mining and processing route at 8Mt of ore per annum, and this has now been increased to 12 Mtpa.

Front End Loaders (FEL) will mine the ore zone in the deposit.  FEL mining provides a high degree of flexibility and will be able to selectively sequence and mine the higher-grade parts of the deposit to maximise the project cash flow. Ore mined by the FELs will be fed to mining units and pumped to the Primary Concentrator Plant (PCP), the Ranobe ore has low slimes content, less than 5%, which should assist the concentration of the ore feed. The concentrator has four stages of spirals and a hydrosizer to produce a heavy mineral concentrate (HMC).

The final HMC, which will have a grade of 92% heavy mineral, will be stockpiled before being fed into the Mineral Separation Plant (MSP).  The MSP will use conventional mineral sands separation equipment to produce final products consisting of primary ilmenite, secondary ilmenite and a valuable non-magnetic concentrate containing rutile and zircon.

All products will be transported, via a planned dedicated 55-kilometre long haul road, to a bulk loading facility, located north of the existing town and port of Toliara.

The Ilmenite products will be bulk loaded via a dedicated bulk-export jetty, which will be established as part of this development. The zircon/rutile concentrate

will be loaded into containers for export from the existing Port of Toliara.  The proposed dedicated jetty is sufficiently deep for larger vessels up to Handymax and Supramax size. 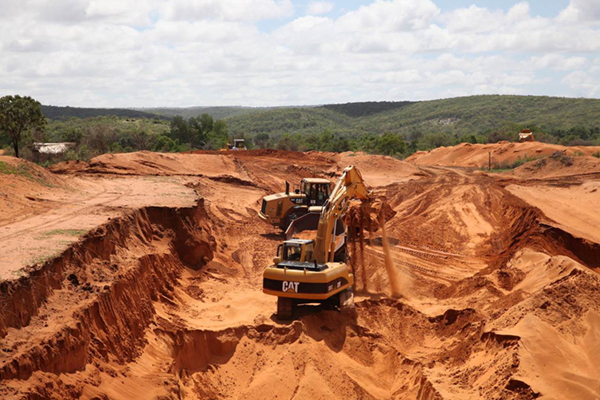 World Titane Holdings is developing the Tier 1 Toliara Sands Project north of the port of Toliara in south-west Madagascar. The Ranobe Mine  is projected to produce 600,000tpa of ilmenite and 65,000tpa of zircon rich concentrate per annum over an initial 20 year mine life. This first phase of development utilises around 27% of the 884 million tonne of Mineral Resource defined at Ranobe.

The overall THM grade of 6.2% for the Ranobe Mineral Resource is high by minerals sands industry standards and the initial Ranobe mine plan focuses on an Ore Reserve averaging 8.2% THM, one of the highest in-situ ore values in the sector. With no overburden and very low slimes (<5%) simple dry mining can be utilised.

The heavy mineral at Ranobe consists predominantly of ilmenite making up approximately 90% of the final products. The project also benefits significantly from the presence of much higher value zircon and rutile which, as a zircon rich concentrate, contribute about 10% of the product volume and around 30% of the projected revenue. The ilmenite and zircon rich concentrate can be easily separated from the ore utilising standard equipment and existing infrastructure can be leveraged to minimise the initial development capital.

A Definitive Engineering Study (DES) was completed in August 2012 confirmed that a low capital investment, low technical risk and simple mineral sands operation can be built using proven technology. A Definitive Feasibility Study is currently underway to evaluate an increased project scale at 12 Mtpa, and to provide updated capital and operating costs.

The Mineral Resource at Ranobe could potentially sustain a life of more than 60 years at the planned production rate for the Ranobe Mine demonstrating the very long life of the Tier 1 Toliara Sands Project. 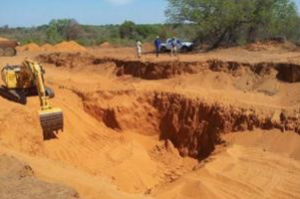 The Ranobe Resource has been the subject of more than US$30 million of exploration and evaluation expenditure since it was discovered by in 1999.

Initial exploration work in the Toliara area was carried out in 1999 and resulted in mineralised sands being identified Ranobe as well as further north at Ankililoaka, Basibasy and Morombe. Further drilling was undertaken in 2000, 2001 and 2003 by which time the resource at Ranobe had been defined.

The Ranobe Mine was the subject of a complete Prefeasibility Study and an incomplete Bankable Feasibility Study carried out by Exxaro Resources Ltd (Exxaro) from 2003 to 2009 and a considerable amount of work has been completed. This includes resource definition (JORC compliant resources) and feasibility study standard reports for mining, processing, infrastructure, environmental and social matters.

A large-scale dredging operation at Ranobe to provide smelter feed for a South African smelter did not meet Exxaro’s investment criteria and, given the adverse global economic and Madagascan political conditions at the time, Exxaro terminated the joint venture with WTR in July 2009.

Following the exit of Exxaro in 2009 a comprehensive review of the project was undertaken and sought a revised development concept for a mine at Ranobe to supply ilmenite, zircon and rutile onto the world markets.

The review identified a new development concept. A dry mine would produce ore which would be mix with water into slurry and pumped to mobile concentrators. After loading into road trains the HMC would be hauled ~40km to a transfer pumping station located on the north side of the Fiheranana River on a dedicated haul road and pumped via a 14km slurry pipeline to an MSP located at the existing Toliara port.

Two ilmenite products and a zircon (75%) and rutile (15%) rich non-magnetic concentrate would be produced in the MSP. The existing Toliara Port would be used to load barges with ilmenite for transfer into bulk vessels inside reef protected water and the zircon rich exported in containers via the existing wharf which was under-utilised.

The revised project concept delivered robust economics from the initial development while retaining scope for further expansion. Based on this positive outcome a Definitive Engineering Study (DES) was undertaken from late 2011.

The DES, managed by TZMI with Engineering & Project Management Services as the lead engineering contractor, was completed in August 2012. Specialist sub-contractors were engaged for various aspects of the study, including the mine and mining method, port, haul road and slurry pipeline.

The study built on the earlier TZMI scoping study and Exxaro feasibility studies. The objective of the study was to;

Undertake sufficient engineering for the mine, processing equipment and infrastructure to ensure the capital and operating cost estimates were robust;
Determine the preferred mining method;
Optimise the number and location of processing plants;
Investigate opportunities to improve export logistics;
Identify any long lead items;
Review the Mineral Resource, develop an optimised mine plan and determine an Ore Reserve; and
Prepare for the tender for project engineering design, procurement and construction management.

The experience of local and international engineering firms, operating in Madagascar, was incorporated to make sure that the costs used in the project economic model reflect the reality of actual in-country costs

In January 2017 a Definitive Feasibility Study was initiated to validate the project concept envisaged in the 2012 DES, but at an increased project scale of 12 Mtpa. In parallel, the existing environmental licence is being updated to allow for the impacts of the higher throughput and the Environmental Management Plans are being completed. This work is scheduled for completion by mid-2017.